A couple of things stark-staringly obvious about Halifax station approach: you can’t park after 06.30 in the morning; and whenever a big train arrives there is a veritable chaos of cars, taxis, pedestrians and the occasional two-wheeler, with vehicles trying to get in to pick up while others are leaving. Pedestrian provision is limited to a footway on one side only, leading to highway-code defying behaviour. A sensible idea would take parking off the bridge, leaving more room for pedestrians (and perhaps taxis and drop-off). Many would say transformed access arrangements should at least double the current amount of rail users’ parking, perhaps with a 2-level car park. But do we really want to encourage more and more people to access Halifax station by car increasing road congestion at the bottom of town? Might it be better to develop best possible access for pedestrians, buses, cycles, disabled and pick-up/drop-off whilst developing neighbouring stations such as Sowerby Bridge and Brighouse for park and ride? Both would require enlarged car parks, and improved train services to match. Just a thought !

Northern were to install automatic ticket gates at Halifax by the end of March.

Shelving for a moment the question of whether or not passengers actually want these awkward barriers, there are franchise targets to meet which seem to mean gating as many stations as possible. Oh, but hang on, it’s now April and no Halifax gates. They’re going in somewhere else first (possibly Skipton, we heard). Apparently there is concern over increased loading on Halifax’s 19th century footbridge when large crowds are queuing to get through. So Halifax gates are postponed (just postponed).

Our station is pretty congested now and could see more massive crowds in future, when, for example, there are big events at the Piece Hall. It’s obvious gates mean delays and queues, inconvenience for people with disabilities, and potential mishaps as people juggle tickets, bags, small children, dogs and cartons of hot drink. But if structural strength of the footbridge is an issue could that be a game changer? Maintenance on the road approach bridge is on hold pending a decision on whether it goes or stays. Currently a weight limit prevents large buses getting near the station entrance. One view says pull the lot down, build a new station building at ground level, have level access to a regenerated Platform 3 and a subway to the island platform utilising space underneath the arches. Some of us (maybe including some rail professionals) wonder if the subway idea is feasible. So maybe what’s needed is a new bridge. Or bridges.

UPDATE March 2017. HADRAG hopes to make Halifax station plans a central topic at this year’s Annual General Meeting, being planned for Saturday 13th May in Halifax. We should have a presentation from Calderdale council officers, and we are also inviting West Yorkshire Combined Authority and the Northern train operator. Watch out for details of time and venue.  Meanwhile here are some points to ponder (just slightly expanded) from our newsletter earlier this year:

HALIFAX station is a mixture of old and new that somehow works. Could it work better? The road approach bridge that once spanned a railway goods yards now separates car-parking from play area on the Eureka childrens’ museum site. It’s a good level access for pedestrians between town and the modern station entrance. Rail users’ car-parking is demonstrably inadequate, and competes with taxis and drop-off/pick-up for space. Viewed from ground level the bridge may be seen as a historical feature that tells a story — or as a barrier between the Eureka site and town-centre attractions. We’ve heard it called an eyesore. With a jocular twinkle in the eye, one HADRAG committee member recently dubbed it a “cast iron leviathan”. Arriving train passengers come out of the entrance and take in a true panorama of notable and some truly great structures—India Buildings, the Imperial Crown Hotel, Square Chapel and the Piece Hall both nearing transformed rebirth, the new Library, Industrial Museum, Halifax Minster.

But the existing bridge funnels people towards Horton Street, dreaded approach that fails to show our great town at its best.

Plans linked to town centre development should move rail-users’ parking to ground level and hopefully create a bus mini-interchange. Beyond that a masterplan hints at what might be done with the approach bridge removed to create an open “station gardens” with pedestrian as well as bus and car links radiating towards the wider attractions. A low-level station entrance could work well with restoration of Platform 3. A third platform would give more space for growing crowds of passengers. But the railway authorities seem to have been at best lukewarm towards the idea. The wider masterplan is truly transformational, potentially linking town and station with a regenerated area around the Nestlé site east of the railway.

The regenerated Piece Hall has potential to attract thousands of visitors to events and many of these could arrive by train. So station access must be adequate to deal with crowds potentially even larger than those of today’s commuters who fill the island platform.

Rail users’ needs foremost, HADRAG is committed to campaigning for retention of level pedestrian access between the bottom of Horton St and the footbridge that leads to platforms. (There is perhaps a small assumption here that the footbridge itself is adequate for future needs.) But does that have to mean keeping the existing road approach bridge? How about a new iconic pedestrian bridge linking to a station with both high and low level entrances. What we do not want to see is the station made less convenient for the large number of existing local train users who access the station on foot via the present bridge.  We are actively engaging with Calderdale council officers and elected members to get the best solution for train users whilst putting the station at the heart of our town.  —JSW 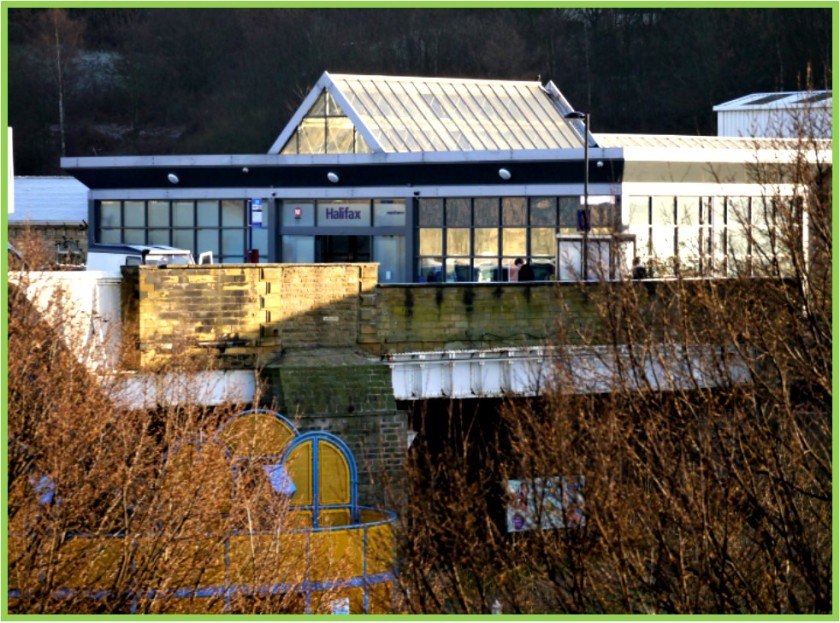 Northern’s franchise agreement requires them to develop community links. Former individual station adopters have been “let go” in favour of encouraging group adoption. This has caused some unhappiness with the former adopters who used to play a regular voluntary role reporting faults and issues. Moving on, however, Northern is understood to have a budget to work with local groups who would take initiatives to make their stations more attractive. Brighouse, Sowerby Bridge and Mytholmroyd undoubtedly show the way for others, involving local businesses in providing sponsorship for small projects, drawing in schools and community groups. It all helps to make our stations places where people want to go. And it should not be about volunteers taking on jobs (such as cleaning) that are properly done by rail staff or contractors. So what about Halifax? There may be less scope for gardening at our big-town station but more opportunity for other community-led improvements.

If you think you could help run such a group for Halifax station, we’d like to hear from you!