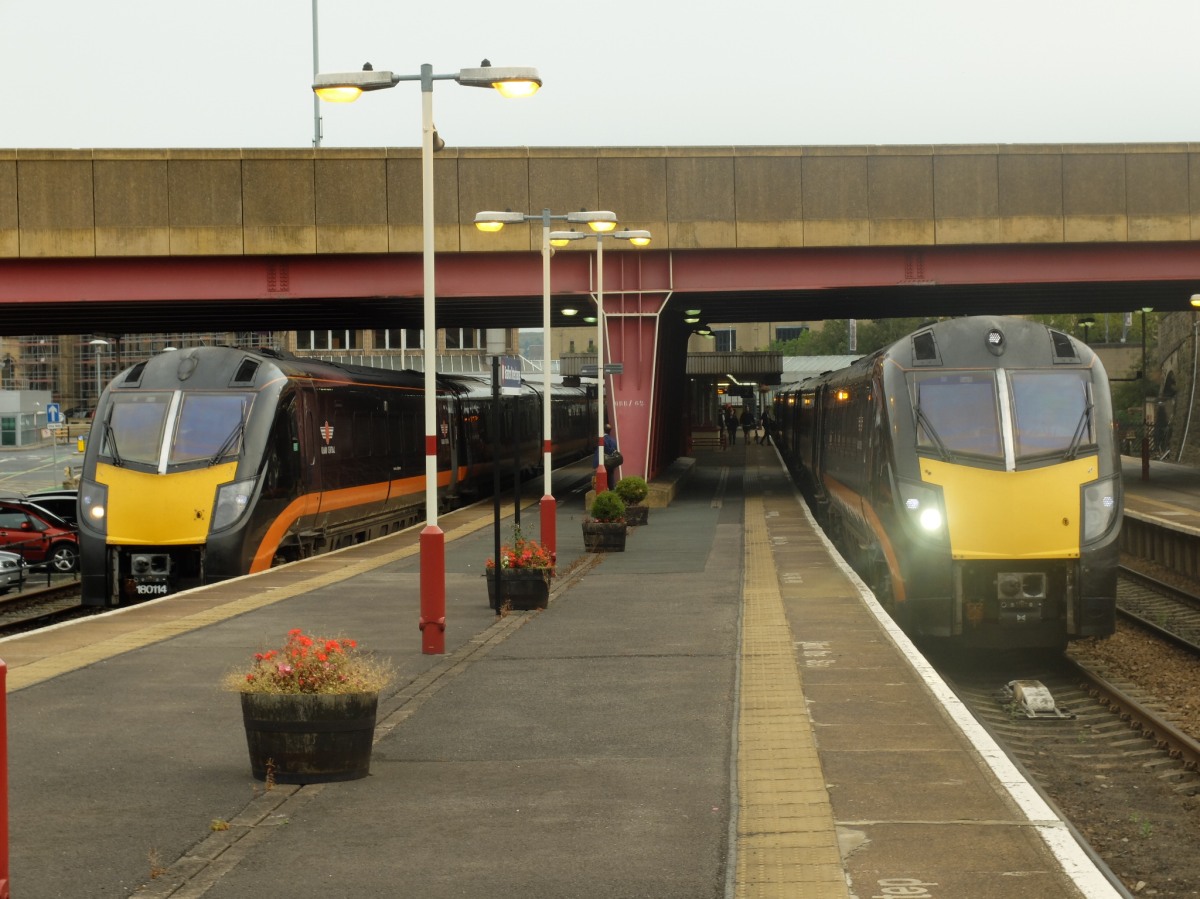 Northern Rail’s local stakeholder manager John O’Grady was well-received by HADRAG members, friends and regular rail users at our October “open committee meeting”. It’s clear that John, who lives in Brighouse, has our local line at heart and after presenting Arriva’s vision for the Northern trains franchise between now and 2019 and beyond, he responded with humour and honesty to our questions.  …more below:

HADRAG is continuing to engage with Northern about both strategic aspirations and short-term concerns. Whilst we look forward to promised developments, and make our case about how we’d like the promised improved train services to take shape, the topic causing most heat right now is undoubtedly overcrowding on Calder Valley Line commuter services.

In short, and clearly not of its own making, Northern has had a shortage of trains since early summer. In a rolling stock grab by the South of good trains from the North, the TransPennine Express franchise lost its “Class 170” units to Chiltern Railways where they will be used to increase capacity on the lines from London’s Marylebone station to Oxford, Warwickshire and Birmingham. This in turn meant Northern had to return to TPE carriages it was using on services in the North-west that it had newly taken over when the two North of England franchises changed hands in April. (Stay with us here!) This meant a shortage of carriages for our train operator and a problem for their train planners to solve. The solution was not good news for our line. From July 9th two Calderdale-Leeds commuter trains previously booked for four carriages were cut back to 2-car trains. Clearly this equates, in round numbers, to a halving of capacity on those two services, the 0720 and 0734 from Halifax to Leeds (respectively starting from Huddersfield and Manchester).  At the same time, and providing relief for some, Northern did a deal with sister Arriva company Grand Central to hire in one of the five-car trains used on Bradford-Halifax-London services. The pleasant, modern unit therefore now does a trip from Bradford Interchange (0743) to Leeds for Northern before forming the mid-morning GC service to London King’s Cross.

This sounds great for Bradford-Leeds commuters who happen to be setting off at that time but has demonstrably done little to help people from Calderdale who have suffered intolerable overcrowding in recent months not just on the 0720 and 0734 from Halifax but also on the Preston-York train that calls Halifax at 0749. We believe the Blackpool-York trains should normally be at least 3-car units but sometimes – all too frequently in fact – only a 2-car set is provided.

All of this is causing anger. As one of HADRAG’s regular commuter members emailed us from the 0749: “Now at Bradford and packed . We are leaving people behind. A woman near me is quite irate. Only positive thing is that by luck and being in the right place I managed to get a seat when somebody got off. Many others have not been so fortunate and are standing up to Leeds.”

HADRAG is concerned that in this situation people are going to start looking at alternative ways of getting to work as the railway’s reputation is damaged.

Why can’t the GC train pick up at Calderdale stations?

What is particularly frustrating for commuters at Halifax and Brighouse is that the Grand Central train comes through our two stations empty on its way from the depot near Wakefield in order to work the new “extra” 0743 Bradford-Leeds. What everyone asks is why can’t this train pick up at Halifax?

And actually HADRAG asked for this when we were first told about the situation back in the spring. We suggested that either the GC unit might form an extra service from Brighouse/Halifax to Leeds or form the Huddersfield-Halifax(0720)-Leeds train or it might even take over the Manchester-Leeds train (Halifax 0734), releasing a Northern unit to strengthen another train. We know this is not as straightforward as it may sound. You have to get the other company’s unit to the right place, the driver has to be passed to work the route, and the new train has to have a “path” in the timetable that fits sensibly and reliably between other services. If the Northern service worked by a GC train were to start at, say Brighouse or Halifax then a Grand Central guard would have to be taxied to whichever of those stations. But that surely can not be such a big problem? Suffice to add that the train planners have not (so far) found a way of implementing any version of HADRAG’s suggestion – sensible though it surely seems! So the 0743 smart 5-car train from Bradford runs with seats to spare whilst 2-car units bringing commuters from Lancashire, upper Calderdale, Brighouse and Halifax are packed to the point of absolute misery and leave people behind on the platform when more can not physically be taken.

We are keeping up pressure on Northern. As we say, it’s not entirely their fault. Everyone concerned just hopes that a solution can be found in the next few months and we don’t have to wait for the new rolling stock promised in 2018-19.

In terms of strategic aspirations HADRAG also continues to press for a good deal from the new Arriva franchise going beyond the promise for principal stations to be served by “Northern Connect” trains to York, Blackpool, Liverpool, Chester and Manchester Airport. We look forward to the brand new trains before 2020. But there are still unanswered questions about service patterns. The franchise announcement last December mentioned an extra train every hour between Halifax and Leeds by 2019 but we have so far been unable to get anyone to confirm whether or not this is to happen.

We still say the benefits of new connectivity across the region should be spread to more of the communities along our line. Our fastest growing Calder Valley Line (CVL) stations seem to be offered uncertain benefits. Passenger numbers at Brighouse station increased 342% between 2006/7 and 20014/15 but Brighouse seems to be promised little more than its existing service (footfall figures from Office of Road and Rail http://orr.gov.uk/statistics/published-stats/station-usage-estimates). The figure for Sowerby Bridge is 115% but although it’s to be designated a “Northern Connect” station we still don’t know how many trains are planned to stop there when major timetable upgrades come along in 2017 and 2019. We do know that would-be users of Sowerby Bridge station tire of seeing trains go flying through non-stop. The new station at Low Moor is expected to open in a few months time with just one local train an hour on the Leeds-Bradford-Huddersfield service, and surely will need more, including an hourly service to Manchester. We could also make a case for at better deal at Mytholmroyd where work is starting on a big new station car park.

New trains and faster more frequent services are something to look forward to over the next four years – more than just jam tomorrow. Meanwhile, down-to-earth issues that occupy us, on top of the major concern about current overcrowding, include:

Finally, Halifax station is to get a line of automatic ticket “gates” controlling access to the platform by March 2017. Some of us have decidedly mixed feelings about this, which is all about “revenue protection”. It certainly does not seem to make the railway more welcoming, though the gates will have to have staff in attendance whenever they are in operation. We have always found the revenue protection staff checking tickets at Halifax station to be pleasant and friendly.