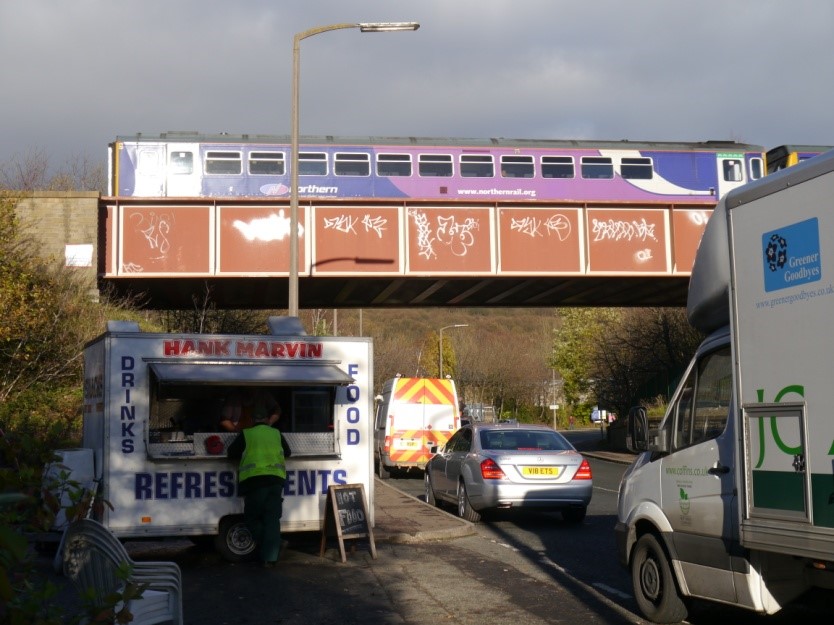 When it comes to investing public money you can’t “just do it”. Every project must jump a course of hoops. Elland station’s Outline Business Case is due to be signed off at West Yorkshire Combined Authority as we write this. Detailed plans should now be developed and Full Business Case (FBC) is due by the end of next year, allowing work to start in 2021. That puts station opening in Spring 2022. We have some concerns about how the project might be affected by the TransPennine Route Upgrade. TRU is the

Huddersfield Line electrification and capacity project, a “CP6” scheme, meaning Network Rail’s 2019-24 control period. Work on TRU will mean blockades — weekends and probably some longer periods — of the line through Huddersfield, in turn meaning diversion of TransPennine Express trains via our Calder Valley line through Brighouse and Elland. We really hope this will not mean Network Rail saying “We can’t stop trains at Elland because we need to run too many diverted services along the route”. CP6 begins in a few weeks but, lacking a communicative fly on the wall at Network Rail HQ, it is still not clear what work will be scheduled when. If the works run till 2024 could it mean a two-year delay for Elland? Surely that must not be acceptable. We have waited long enough for a station originally envisaged as part of Brighouse line reopening nearly 20 years ago. But what if there were another possibility? With major works to put up electrification structures, and – we very much hope -add extra tracks, Huddersfield station could be temporarily closed for significant periods. So could Elland be a convenient alternative railhead for Huddersfield passengers? And so could there be a good argument for bringing the Elland project forward and opening the station sooner rather than later? HADRAG has asked the questions; we shall press for answers.

HADRAG welcomes this summer’s major step forward in planning Elland station as an ambitious transport hub, and calls for the Northern train operator to rise to the challenge of upgrading train services on the line. We say with a decent timetable Elland-Leeds by train could take just over 20 minutes. MORE BELOW…

In June the combined authority’s West Yorkshire and York investment committee recommended allocation of up to £22million from the West Yorkshire Plus Transport Fund (WY+TF) to an ambitious project that should make the new station at Elland a local transport hub, with pedestrian, bus, park & ride and cycle links, by 2022.

This is a major step forward for Elland, the town that has been waiting for its own railway station since Brighouse opened 17 years ago. The scheme will now move forward towards the next hurdle, outline business case, which should be completed by the end of next year. By then the project will have achieved what Network Rail calls “GRIP 4” – single option development, with detailed design (GRIP 5) following over the next two years.

The £22M (which includes allowance for 20% overrun in delivery costs) buys considerably more than just a simple train station. The key elements of the ambitious  project are:

This sounds very much like the sort of local transport hub that HADRAG called for just four years ago after we held our 2013 annual meeting in Elland .

We understand the car park could be built on two levels, and hope bus operators will be persuaded to provide services linking the station and all the surrounding communities. Sustainable commuting and leisure also look to be encouraged by the scheme. We look forward to being able to access the station on foot or with a bike from the canalside “green” route.

The station also has an obvious potential role in hospital transport for staff, patients and visitors. Could shuttle buses linking the two NHS sites at Calderdale (Salterhebble) and Huddersfield (Lindley) be developed to call at Elland station?

In terms of the local community, HADRAG says Elland station, with good park & ride and sustainable transport links should be seen as serving not just Elland itself but also Greetland and Stainland, a total “Greater Elland” population of more than 20,000. As such the station will have a catchment as populous as the areas served by stations like Brighouse or Sowerby Bridge. In fact we reckon any one of Sowerby Bridge, Elland or Brighouse stations potentially serves as big a population as the two main upper Calderdale stations – Todmorden and Hebden Bridge – combined.

But of course Todmorden and Hebden Bridge, along with Halifax, currently have almost double the train service level of either Sowerby Bridge or Brighouse. Sowerby Bridge (and Mytholmroyd) should see some improvement next year with the Blackpool-York trains stopping. We really hope Northern will build on that at the end of 2019 when the next big timetable recast comes. And of course HADRAG continues to argue the case with train operator Northern for a better deal for the Brighouse corridor. In our response to Northern’s timetable plans we have specifically asked for future timetables to include make allowance for all trains that currently stop at Brighouse also to serve Elland. We have also want the Manchester-Rochdale-Brighouse-Leeds “valley bottom service” to run later at night and on Sundays, something that does not, so far, seem to feature in Northern’s plans.

As an ambitious transport hub, Elland station will be another reason to upgrade the timetable. Opening 22 years after neighbouring Brighouse, the new station may still seem frustratingly in the future. But at least by 2022 we hope there may be further timetable improvements. Under the existing service patterns, Elland would be served by hourly trains on the Manchester-Brighouse-Leeds and Huddersfield-Bradford-Leeds routes, effectively an hourly stopping service to key destinations. We have joined our colleagues in the Upper Calder Valley Renaissance Sustainable Transport Group in calling for a service from the upper Calder Valley to Huddersfield, meeting commuting, educational and other sources of demand. That would give an additional service along the Sowerby Bridge-Elland-Brighouse corridor. But we also need better services Elland/Brighouse-Leeds.

Potential for fast journey to Leeds

We want Northern, Network Rail and their train planners to rise to the challenge of providing an upgraded timetable for Elland/Brighouse rail corridor. It probably needs some capacity improvements in the Huddersfield and Mirfield area as well as a more ambitious approach by the train operator.

Finally, HADRAG has repeatedly, over may years, pointed out the potential to speed up trains on the direct Brighouse-Dewsbury-Leeds route. At present Brighouse-Leeds takes about 34 minutes, calling at nearly all stations. So that would be 37-38 minutes from Elland. A fast service, with maybe just intermediate stop, would easily cut the Brighouse-Leeds journey to 20 minutes. So stations all the way up the valley would get a Leeds service that could be 10-15 minutes faster than at present. Elland-Leeds could be about 23 minutes.

What could go wrong? One complication is the TransPennine Route Upgrade. This is the project that was meant to include Huddersfield Line electrification, though it sounds increasingly as though it may not. With or without electrification there is likely to be upgrade work to improve capacity that will mean diversions of TransPennine Express via the Calder Valley line while the work is going on. The plan seems to be that this will be completed before Elland opens. Fingers crossed, then. -JSW