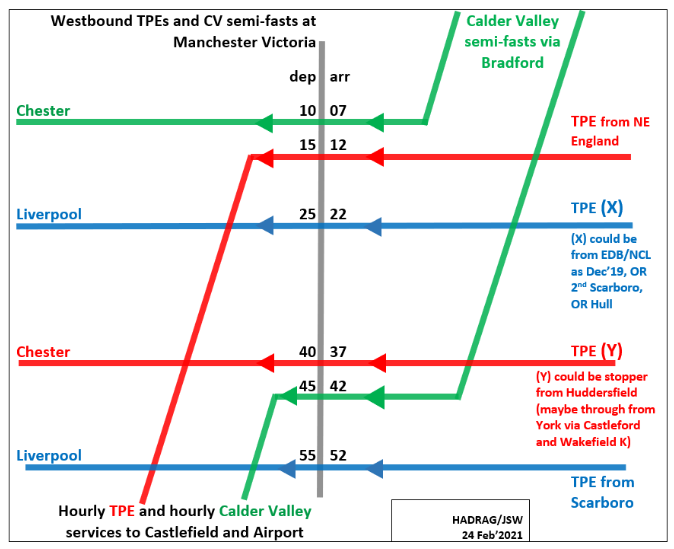 There remains the former franchise promise of a service from Bradford to Manchester Oxford Rd, Piccadilly and the airport. Responding to the MRRTF report, we asked for this to be included in the recast expected next year. We showed how the Calder Valley line to Bradford serves a similar population to the Bolton line to Preston, but has a much less well-connected service. Demanding a new link when other routes in the area are having to accept cuts is a big ask, but we ask for a fair approach, saying Calder Valley and TransPennine Express could both have an hourly path round the “Ordsall Chord” to Castlefield, with connections at Man Vic – see our diagram (times are illustrative only). We also say that is that if there is to be a wider recast of the timetable next year the opportunity must be taken to deal with the faults in the present Calder Valley
service pattern. Fast trains timed to go slow following freight trains. Missing late night stops for Sowerby Bridge and Mytholmroyd. And no Manchester trains at Mytholmroyd on Sundays. We need more trains to stop at Sowerby Bridge including the York-Blackpools. And a better service on the Brighouse/Elland line – including more trains going up the valley on Sundays for leisure trips. Keeping up the struggle – JSW